Rugby League player Gabriel Hamlin has been suspended from all sport for a period of two years following an Anti-Doping Rule Violation (ADRV).

Mr Hamlin provided a urine sample In-Competition on 8 February 2019, following a Super League match between Wigan Warriors and Leeds Rhinos at the DW Stadium in Wigan. Analysis of Mr Hamlin’s sample returned an Adverse Analytical Finding (AAF) for benzoylecgonine, a metabolite of cocaine.

Pat Myhill, UK Anti-Doping Director of Operations said: “Cocaine is a dangerous drug with significant health risks, which has no place in sport.

“This case is another example of a metabolite of cocaine resulting in an athlete receiving a ban from sport. We realise that the length of sanctions for this substance can vary between cases, this is because of the specific sanctions laid out in the Anti-Doping Rules. The independent expert witness in this case ruled out the possibility that ingestion took place during the In-Competition period. This means that a possible four-year ban was reduced to two years.

“Athletes are solely responsible for what is in their system, regardless of how they claim it got there and whether there was an intention to cheat or not. It is quite simply not worth the risk.”

Benzoylecgonine is listed under section S6a (Stimulants) of the World Anti-Doping Agency (WADA) 2019 Prohibited List. It is a non-Specified Substance and its presence in an athlete’s system is prohibited In-Competition only.

Mr Hamlin was charged with violating Anti-Doping Rule Article 2.1 - "Presence of a Prohibited Substance or its Metabolites or Markers in an Athlete’s Sample”.

The period of ineligibility to be applied in accordance with Anti-Doping Rule Article 10.2.2 in these circumstances is two years.

Acknowledging Mr Hamlin’s timely admission of the ADRV, the period of ineligibility started on 8 February 2019 and will end on 7 February 2021. 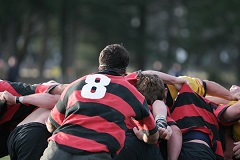 Rugby League player banned for four years
07-06-2018
Next Article: Urine sample concentration change to come into effect ahead of the Tokyo Games: What this means for athletes